Note: Those who hang around my blog know that I like to take examples from published stories and extract writing tips. My critique buddy Amitha Knight does the same, but with TV shows. She is the author of today's guest post. Check out Amitha's blog Monkey Poop for more TV related writing tips and publishing news. 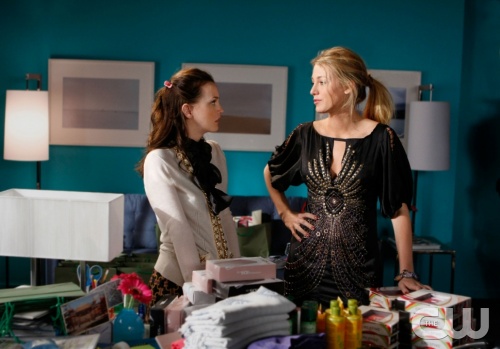 It's no secret that I love Gossip Girl. Even if you don't, you have to concede that it is a very successful show.

Here are some tips on crafting characters I've come up with from Gossip Girl:

#1 No one is perfect

Don't be afraid to have your main character make mistakes. The bigger the mistake the better. On Gossip Girl, everyone's favorite Love-to-Hate character Blair isn't the only one who messes things up for everyone else. Remember Dan's affair with a teacher? Yikes. And what about when Vanessa lied to her friends so she could be the head speaker at an important event?

As a writer, I am often afraid to let bad things happen to my characters, but isn't that how we capture an audience? If nothing scary ever happened, how could we ever relate?

Ex: Jenny quits school to pursue her dream of being a fashion designer, but things do not work out, and she ends up practically homeless. Another example: Serena is pretty and popular, but her fame often gets in the way of her friendships and relationships and often leads her down the wrong path (drinking too much, meeting people who want to take advantage of her, etc.).

#3 Likable main characters don't have to like each other

Chuck and Dan don't have to get along for us to like them. In fact, it's fun watching them argue with each other and realizing that they can both be right and both be wrong at the same time. This happens in real life all the time. Personality conflicts can make enemies of good people. Likewise, people who start off as best friends don't have to stay that way...

#4 People change, but not completely

Blair has grown from the first season--she is more trusting of others and has more self-confidence--yet she is still as conniving and manipulative as ever. She just feels bad about it more now than she did before. If Blair ever stops doing despicable things, I'm pretty sure I'll stop watching the show.

Okay, not so sure how to turn this into a writing tip. Anyone?

But not every episode of Gossip Girl is perfect. Episodes that fail for me often contain one of two things (and hopefully not both):

Ex: Big news! Serena killed someone and is keeping it a secret from everyone. And when the whole secret comes out we learn…oh wait. it was on accident and not really her fault. Lame.

This second sounds like obvious advice but, take a look at your work and you'll be surprised. I've had to delete several chapters once I've realized how similar the plotlines were to another story I had written (sometimes even within the same book). Those of you working on series have to worry more about this than other since you have to be really careful that the cool thing you pulled on your character in book 1 doesn't get pulled again in book 3 (or 5 or 7).

Any Gossip Girl fans out there? Have you learned any valuable writing tips from watching this show?

Images from CW and anatomyofamuse