My Income Distribution for 2015

I'm getting my finances together from last year, and thought I'd post some stats on my writing income for 2015, as I did for 2014.  No specific numbers, but some trends.

Here is my writing income distribution for 2015: 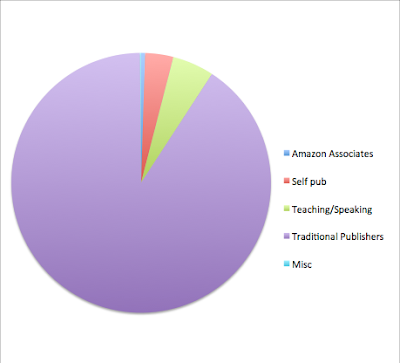 91% of my income last year was from my traditionally published YA.  This included the second half of my advance from Daughter of Dusk and also my first royalties from Midnight Thief (yay!). The next highest income source was speaking and teaching fees (5%). That was a new category for me this year and something that I'd like to investigate more in the future. After suffering from some book event burnout at the end of last summer, I think I'm going have to be more discerning about appearances, especially if they don't pay an honorarium. Self pub income was about 3.5% of my income.  I didn't put out anything new this year, so these are all sales of books I had up before. 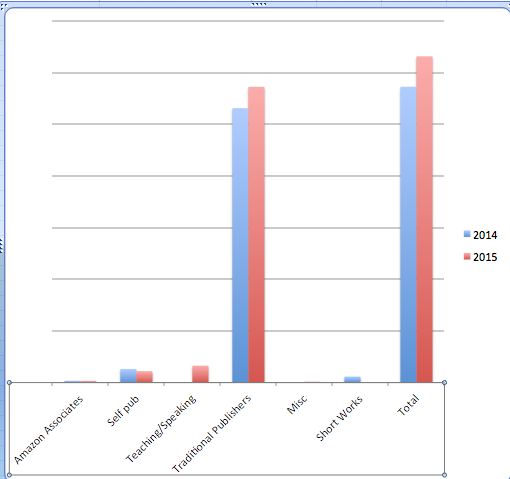 Self pub income was slightly lower, which makes sense since I didn't release anything new. The increase in traditional publisher income is mostly due to Midnight Thief starting to earn royalties. It's nice to see the total slightly higher than before, though as for the actual number, let's just say I'm glad Mr. Blackburne has a steady job. We like to say that he married me for my potential millions, and I married him for his guaranteed thousands ;-)

2016 should be an interesting year.  I'm drafting two books right now on spec -- one in the Midnight Thief universe and one unrelated YA fantasy.  So depending on how I end up publishing them, next year's chart might look quite different.

So writers, any financial thoughts/goals for 2016?

Hope you enjoyed this post! To get regular updates from this blog, use the subscription options on the sidebar.
Posted by Livia Blackburne on 1/21/2016 08:21:00 PM